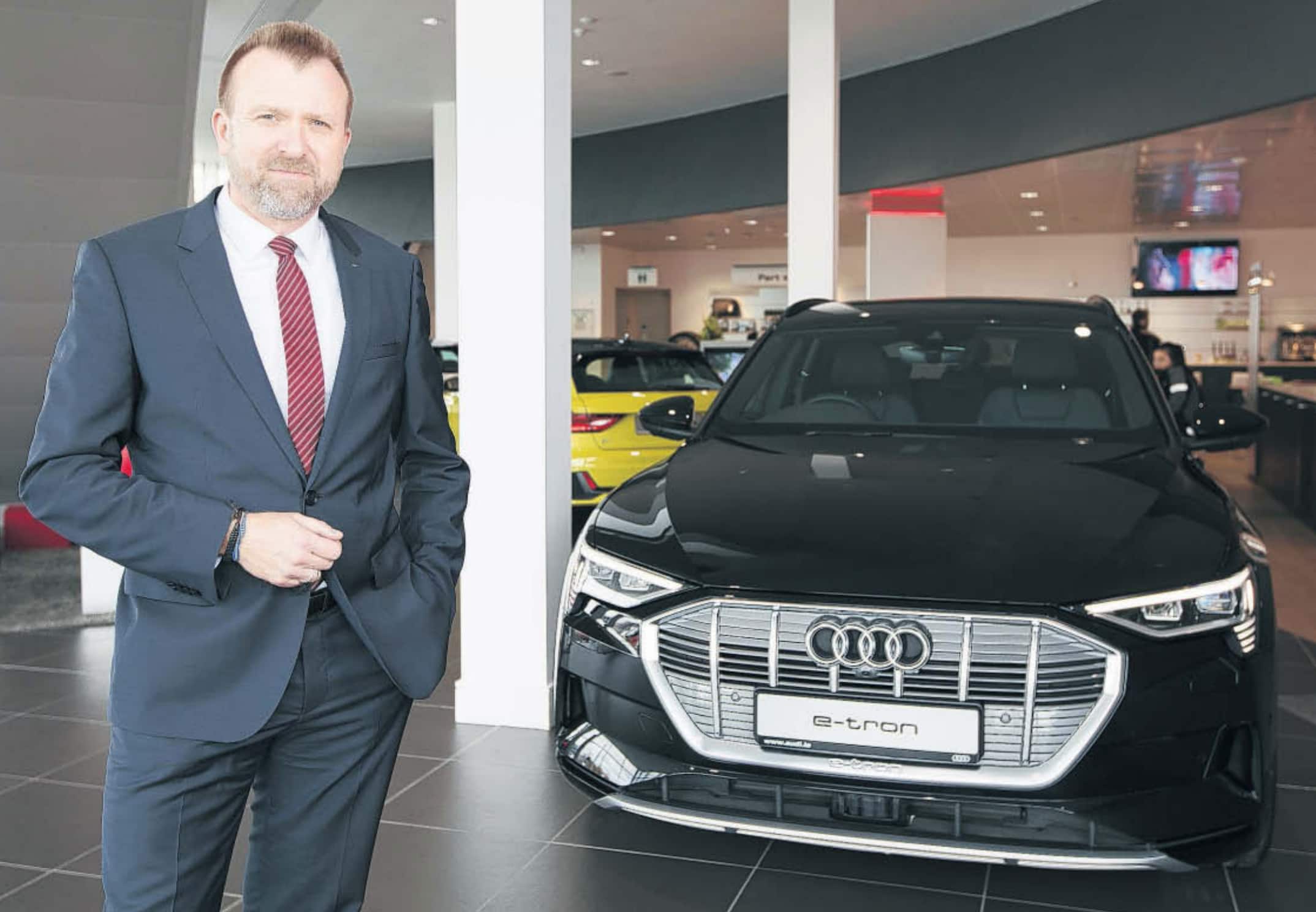 ‘So, you enjoyed my car? I just got it,” says Thor- sten Godulla, managing director of Audi Ireland, settling into his tidy office. It is dominated by a large action shot of an Audi quattro rally car in the 1980s, and there are model cars and motoring books on the shelves. A framed certificate marks Godulla’s 25 years at Audi.

Before the interview, Audi provided a new e-tron 55 — an electric SUV with a €103,600 price tag — for a five-day test drive. It had a straight-from-the-factory smell and 250km on the clock. Nobody mentioned it was Godulla’s own car.

“I think it’s a great car,” he says, in almost fluent German-accented English. “Before this I drove power models, where you always want to accelerate, you know. This is like cruising.”

The e-tron is Audi’s first fully electric model, with the equivalent of a 407- horsepower engine and an advertised range of 400km on a full charge. The only downside is keeping an eye on the battery life and plotting to find a charger.

Audi sold 47 e-trons in Ireland last year and has sold 30 so far this year — enough to keep Godulla happy. He loves his e-tron but is, quite categorically, not trying to flog one to everyone he meets. “I don’t want to sell an electric car to someone who doesn’t need an electric car. I want to sell the right car for what you need,” he insists.

Crucially for Godulla, who arrived in Ireland in October 2018, Audi remained at the top of the premium segment for the 11th year, outselling BMW and Mercedes. He aims to continue that run, helped by a range of new models, such as an e-tron 50 costing €74,000, or €64,000 after grants.

There will be plug-in hybrid models of its popular A6 saloon and Q5 and Q7 SUVs. A Q4 e-tron, due to arrive in mid-2021, should cost less than €50,000. “That is the car where you reach a broader spectrum [of buyers],” says Godulla. “The e-tron 55 price was a little bit ‘oof’, for some people.” Selling cutting-edge cars is the glamorous side of Godulla’s job. The challenges include battling used-car imports, uncertainty about Brexit and convincing consumers their high-price diesel and petrol cars will not soon be worthless.

“We are in a transition period. My big boss says we are in the biggest change in the automotive industry in its history. The important thing is we have a plan.”
Godulla grew up in Ingolstadt in Bavaria, where Audi has its headquarters: a giant factory and motor museum. His father worked for Audi for 50 years and was head of production in Ingolstadt, with responsibility for 13,000 workers.

“My brother works for Audi, my sister works for Audi. It was always part of the family conversations,” he says. Despite — or because of — that, Godulla never wanted to work for Audi. After “middle school”, he did an apprenticeship at a bank for two-and-a- half years and worked there for a year. “Then I had a heavy motorbike accident. I nearly died. It caused a mindset change, that life can be over so quickly. Work is not everything.”

Godulla went back to school and on to university, studying business and specialising in accountancy. During his course, he did a six-month internship in a Volkswagen factory in Mexico. “I think so often about that time. I always say to young people to go abroad. It opens up the world and puts your own country in perspective,” he says.

His 19-year-old son is doing charity work in Bogota, Colombia; his eldest worked in the Buenos Aires slums before becoming a doctor.
After university, Godulla decided it was “maybe not so bad” to work for Audi after all. He joined the finance division in Ingolstadt in June 1994 and worked in treasury and cash management. His CV includes helping to sort out the finances of Cosworth Technology, the UK engine-maker that Audi owned for a while.
In 2004, Godulla was appointed brand controller at Audi UK, based in Milton Keynes. He was responsible for all financial aspects of the UK operation, which sold about 100,000 cars a year. “That was a great experience. You can be a finance man but also have a business perspective, to improve the business.” In 2007, he got a call from Audi HQ: would the finance man consider becoming a sales guy, as sales manager for Audi UK? He had no hesitation. “It was my next big leap. I quickly had the feeling that this is what I always wanted to do.” His three years in the role spanned the financial crisis, when business “went dramatically down”. Audi had temporary shutdowns at its factories but Godulla looks at the positives. “How many times do you have a chance to work on ideas to survive in a crisis? I learnt so much.”

In late 2010, he moved again, becoming head of sales incentives for Audi Germany, which sells 250,000 cars a year. It was a promotion into management, with staff reporting to him. “I’m a strong believer in team spirit. I played football for 20 years. Everybody needs to do their job for the team.”
In 2013, he became head of sales management for the Audi A4, A5 and Q5 models in the German market. Two years later, he was named director of sales for Africa, the Middle East and Near East. Based at Audi HQ, the job spanned 22 countries, including South Africa, Saudi Arabia, Oman, Qatar, Israel, Egypt and Lebanon. He travelled for two weeks every month. After the EU and UN security council reached a nuclear deal with Iran in 2015, Godulla became project leader for Audi’s market entry to Iran. “I went a few times to Tehran and met all the Iranian ministers. It is a really interesting place,” he says.

At one point Godulla had three passports to navigate geopolitical differences — and he says having an Iranian stamp on his passport could have posed problems for entry to Israel or Saudi Arabia. He was in that job when the emissions scandal engulfed Volkswagen, the Audi parent, after it was shown to have put devices in diesel cars — including Audis — to cheat emissions tests. Volkswagen has since spent more than €30bn on legal costs and fines relating to the scandal. Last year the former Audi chief executive Rupert Stadler was charged with fraud. “First, something like this should never happen. Never,” says Godulla. “It created a lot of frustration across the staff because it is about integrity.”

He does not wallow for long. The past is the past, he says, and, on the upside it “probably accelerated the move to electric” across Volkswagen Group.
Godulla admits the emergence of Tesla pushed that process along as well. The US firm sold 270 new cars in the Republic last year, comfortably more than double the figure for 2018.

“Tesla are the pioneers. They have changed the direction of the industry dramatically. But we have a heritage and experience of more than 110 years.”
In 2018, he got the call about Ireland. With his experience in the UK and else- where, Audi felt he was the perfect fit. “I said, ‘Yes, I agree.’ After being in the Middle East, I was desperate to work with business partners who understood the full supply chain. It is not just about selling a car; it is about keeping the customer loyal, bringing them back to the workshop and selling another car in a few years.” Godulla has high praise for Audi’s Irish dealer network, which was culled from a high of more than 30 outlets a decade ago to 11. That means many prospective customers face a journey even to see a new Audi. The showrooms, called “terminals”, have a focus on the customer experience and prestige of the brand, he says. “It is about exclusivity.”

Godulla got a rapid education in the issues facing the business in Ireland, including used-car imports and uncertainty created by Brexit. He notes the apparent contradiction that the economy is growing and unemployment is falling, but new-car sales are dropping. That is partly down to the rise in imports — a bugbear of the industry. The import figures include a backhanded compliment for Audi: of the almost 114,000 used cars imported to Ireland last year, nearly 11,000 were Audis.

“It means Audi is desirable, but it creates pressure on our own dealers, who want to sell cars,” he says. “There is also pressure for the government because it gets about €9,000 for every new car sold but only €3,000 on an import.” Godulla believes mixed messages about the future of petrol and diesel cars confuse customers. The government has a target of having one million electric vehicles on the road by 2030, and rival Toyota has declared that diesel is dead. “For me diesel is by far not dead,” says Godulla, firmly. “Our diesels are getting cleaner all the time. I tell you, there will still be demand for these cars.”

The government target is “absolutely not possible”, he says. It would mean that 80% of new cars sold over the next decade would need to be electric. The figure last year was 4.2% and could reach 5.5% or 6% this year, he believes. “The mix will grow over the next few years. But there are still many issues [with electric cars], including the supply of batteries,” he says.

Despite its aggressive targets, the out-going government removed grants for businesses to buy electric cars and capped the benefit-in-kind applicable at €50,000. In Norway, where electric cars are VAT-free and can use bus lanes and free parking, the e-tron is the bestselling car, he says. Norway also has far more charging points than Ireland, says Godulla, who would like the ESB to invest in more charging points and upgrade its network. As it is, anyone buying an electric car needs a charger at home, he says.

“Back in 2005, I had a Nokia phone that needed to be charged only every week. Now I have an Apple that has to be charged every day. It’s like that with the change to electric cars: you come home, park your car and plug it in.”

By 2025, Audi intends to have 10 fully electric models and 20 plug-in hybrids. Godulla, who was recently named president of the German-Irish chamber of commerce, is likely to be elsewhere in the Audi empire by then. “I will be at least three years [in Ireland] but I am open to it being longer,” he says. “Who knows? I never thought I would end up in Ireland.”